After a relaxing afternoon at the pool with good bladder control, we thought, "Man, this is going to be a piece of cake!" By 11:00 that evening, we were having second thoughts, actually Brett was thinking - fearing, cringing at the thought, - "It would really stink if I have to have the catheter put back in." From about 5:00 p.m. until 11:00 there was no urge to empty the bladder, and no success when he tried. He began to worry, anxiety roars it's ugly head again. I am sure his stress was not helping. Blockage only occures in about 5% of the cases and since he had been going earlier in the day, I felt that he would be ok and knew that he needed to relax. Very easy for ME to say. I remembered the PA at Dr. Patel's office telling us that sitting in a warm bath may help. He sat in the tub for a few minutes - frustrated so he didn't stay long. I did my best to get him to relax, but found myself falling asleep. Brett took his medicine and went to sleep pad free. Next thing I knew it was 2:00 and Brett woke me up to tell me he was going "potty". Yeah!!!!! Actually, this was the second time he had gone. (He was also experiencing other things that you men out there can relate to - the natural male functions with early morning urinations - yeah baby!) Things are looking good. :) Baby New Year is making progress! Relieved, we both went back to sleep. From that point on, he went two more times before we got up at 7:00. I'm so proud of him - AND the awesome thing is that he has excellent bladder control and very little leakage. But, wait, there's more. We were lieing in bed watching a movie and off he goes to the bathroom. Yes!!! He finally had a movement, six days later! He's such a big boy! The moment was a monumental as Allison's and Kari's first bowel movement in the pot! Seriously though, he has to retrain his muscles as his body adjusts to the removal of the prostate. He is doing remarkably well. His stress is his worst enemy.

We're waiting to see what the weather is going to do. It's very foggy - zero visibility - so we haven't decided if we are going wait for the fog to lift and get a little pool time in or just hit the road back to Panama City. I'm not sure exactly what the drive home has in store for us. I anticipate a lot of pit stops!
Posted by Brett Troia at 8:25 AM 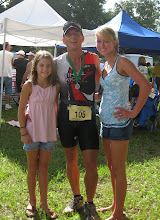